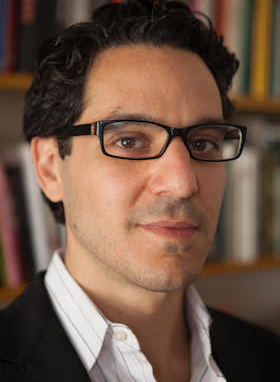 Noam M. Elcott writes, teaches, and advises students in the history of modern art and media in Europe and North America, with an emphasis on interwar art, photography, and film. His research and teaching combine close visual analysis with media archaeology and critical theory. He also writes and teaches on contemporary art. Recent classes include graduate seminars on the Bauhaus, Dada, Surrealism, Futurism, media architecture, and the avant-garde cinematic imaginary as well as the undergraduate lectures: "Art, Media, and the Avant-Garde," "Histories of Photography," and "Art Humanities." Elcott is the author of Artificial Darkness: A History of Modern Art and Media (University of Chicago Press). Encompassing diverse figures such as Étienne-Jules Marey and Richard Wagner, Georges Méliès and Oskar Schlemmer, Elcott's book is the first to conceive, historicize, and theorize artificial darkness and the art and media that gave it form. Elcott is currently at work on Art in the First Screen Age: László Moholy-Nagy and the Cinefication of the Arts (University of Chicago Press), which traverses interwar painting, architecture, photography, film, theater, and exhibition design in the age of cinema. Elcott is an editor of the journal Grey Room which brings together scholarly and theoretical articles from the fields of architecture, art, media, and politics. His articles have appeared in leading journals like Grey Room, October, and Aperture, as well as in many museum catalogues and scholarly volumes, including monographic essays on Anthony McCall, Stan Douglas, James Welling, the London Film-Makers' Co-op, and other contemporary artists. He has lectured widely in North America, Europe, and also in South America. Elcott was educated at Columbia University (B.A. summa cum laude 2000) and Princeton University (Ph.D. 2009) and is the recipient of Fulbright, Mellon, DAAD, and other fellowships. In the coming years, he will be a fellow at the The Internationales Kolleg für Kulturtechnikforschung und Medienphilosophie (IKKM) at he Bauhaus-Universität Weimar and at the Center for Advanced Studies BildEvidenz, History and Aesthetics at the Freie Universität in Berlin.
Back to Top