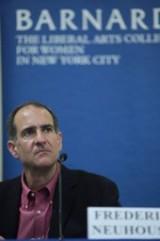 Professor Neuhouser is also an affiliate scholar in the Center for Psychoanalytic Training at Columbia University.

His latest book is Rousseau's Theodicy of Self-Love (Oxford), on Rousseau's account of both the dangers and the redemptive potential of self-love (amour propre).